Link to Site Map pageSkip to navigation Skip to content 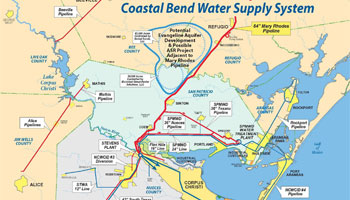 “Should there be a shortage in the basic supply of water which requires the restriction or curtailing of any consumer of water within the city limits of Corpus Christi that coincide with such restriction or limitation within Corpus Christi, the District will limit and restrict all of its customers, both direct and indirect through resale to the same extent.”

Presently, there are two water systems that provide water to the Island. From the North, treated water is purchased from the San Patricio Municipal Water District (SPMWD) which is re-pumped at the Beasley PS in the City of Aransas Pass. it is then transmitted through an 8-inch and a 12-inch line on Harbor Island to the Corpus Christi Ship Channel, and a 20-inch line carries the water under the ship channel to the Ferry Landing PS in the City of Port Aransas. SPMWD’s contractual agreement with NCWC&ID#4 presently states that the maximum daily supply is 1.2 MG. In the South, the Island obtains water from the City of Corpus Christi by a 24-inch line from the Flour Bluff area which is re-pumped at the Sanddollar PS and transmitted through a 20-inch line to the Mustang Island PS. A 20-inch line and a 16-inch line carry the water to the NCWC&ID #4 system at the North end of Mustang Island State Park.

The contract provision indicated above regarding restriction applies to the supply from the SPMWD as well. In addition to the main transmission for water supply indicated above, the District has the following facilities:

A. STORAGE AND PUMPING

The elevated and ground storage tanks perform different functions; however they both aim to decrease the impact of the demand fluctuations. The distribution system provides water to the elevated storage tanks that serves three purposes:

In addition to meeting the TCEQ elevated storage criteria, sufficient storage should be provided to meet four hours of fire flow demand in excess of 3,500 gpm with no pumping according to Insurance Services Organization (ISO). The current system will soon have an elevated storage capacity of 1.5 MG, therefore the system is adequate and meets the maximum fire flow demand with no pumping (3 ,500 gpm multiply by 60 minutes/ hour multiply by 4 hours equals 840,000 gallons). Refer to Table’s IV-2 and IV-3 for a comparison of the TCEQ minimum standard requirements to the District’s available storage and pumping capacity.

The storage tank and pump station locations and capacities are described in the following:

The District has the following two elevated storage tanks:

The combined elevated storage capacity for the District will be 1,500,000 gallons.

The District has the following six ground storage tanks:

The Beasley Pump Station and associated storage tanks located on Beasley Street in Aransas Pass, approximately seven miles west of Port Aransas, store water received from the SPMWD and pump it to Port Aransas through an 8-inch, 12-inch, 20-inch and 24-inch transmission lines. The pump station is equipped with two pumps that run independently of one another; two 125 Hp pumps with current capacity of 1,000 each. According to District personnel, the normal operating pressure is 55 psi and the average pumping capacity is 1.30 MGD with one 60 Hp pump in operation. According to the Harbor Island Water Study model and as discussed in Chapter VII, the maximum pumping capacity at the Beasley PS, with an operating pressure of 72 psi, is 1.4 MGD.

The Mustang Island Pump Station and associated storage tanks located approximately 11 miles south of the city of Port Aransas on Mustang Island store water received from the City of Corpus Christi. The water is then pumped to Port Aransas through a 12-inch, 14-inch, 16-inch, and 18-inch transmission lines. The pump station is equipped with two pumps that run independently of one another; two pumps have a 200 Hp motor with a capacity of 2,070 gpm each maintaining an average operating pressure of 70 psi. The maximum pumping capacity of the Mustang Island Pump Station is approximately 3.60 MGD according to District personnel. The district is currently in design to increase capacity with expected completion in late 2018.

The NCWCID #4 no longer operates or maintains any water wells. The locations of the pump stations and storage tanks are illustrated on Figure III-1.

The distribution system is designed and should be sustained to provide a minimum operating pressure of 45 psi during normal conditions and a minimum of 20 psi during extreme operating conditions, such as during a fire flow demand. According to TCEQ, the minimum normal pressure allowed is 35 psi. Pressures above 80 psi should be limited and no greater than 120 psi due to potential harmful affect on the system and higher operating costs.

For water leaks or other emergencies, leave a message at 361-749-5201.
On call personnel will contact.